Two Barnsley men received custodial sentences and costs totalling over £4,000 for fly-tipping and other environmental offences following an appearance at Barnsley Magistrates Court on Monday 25 November.

James Upton, 24, of no fixed abode and Kieron Yates, 19, of Evelyn Terrace, Barnsley, pleaded guilty to charges under section 33 of the Environmental Protection Act 1990 for depositing controlled waste and offences contrary to section 1 of the Control of Pollution Act 1989 for transporting waste without a licence. The incidents involved them approaching houses uninvited and intimidating vulnerable members of the public into paying them for removing waste, which was then dumped illegally.

The pair’s activity was discovered when the council’s enforcement team were investigating fly-tipping that followed similar patterns, where waste would be taken away in wheelie bins which were abandoned in the local area and would later be found dumped close to the victims’ home.

Mr Upton was handed a 26-week immediate custody and ordered to pay costs of £2,195. Mr Yates was given a 22-week custody suspended for 12 months with a rehabilitation activity requirement for 20 days and 200 hours unpaid work and was also ordered to pay £2,195 towards the costs of the prosecution. Both men are now subject to Criminal Behaviour Orders with terms prohibiting them from offering to remove waste in future.

Wendy Lowder, Executive Director for Communities, said: “I’d like to take this opportunity to thank the members of the public for their statements, without the cooperation of our fabulous communities, we wouldn’t be able to take these cases to court. These results send a strong message that fly-tipping will not be tolerated. As part of our #EverybodyThink campaign, we will continue to work with the police and the public to tackle environmental crime. Help us to protect our beautiful borough by making sure you only give your rubbish to someone with a valid waste carriers’ licence.”

To find out more about the work Barnsley Council is doing to reduce environmental crime and increase recycling, visit facebook.com/DumpitandScarper or follow the hashtag #EverybodyThink. 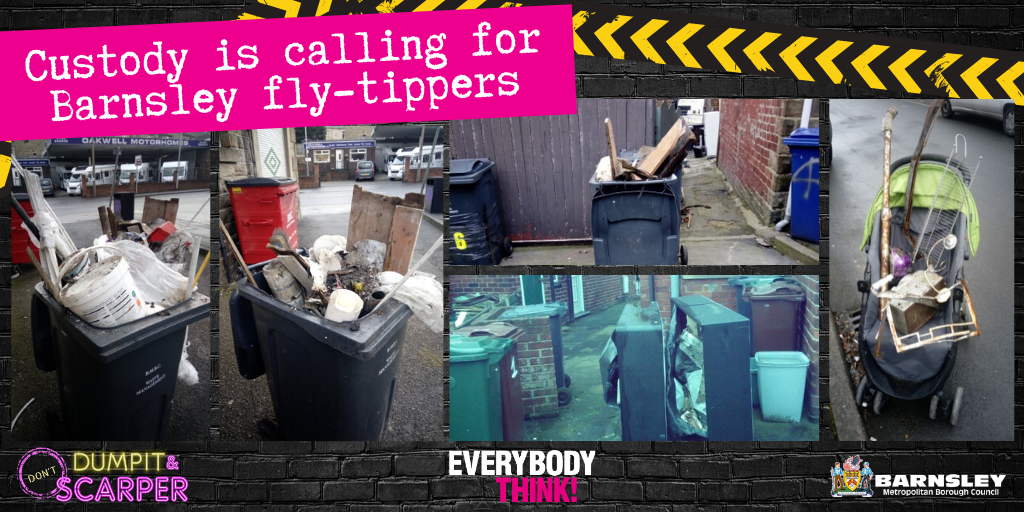