Barnsley Council has today launched a new campaign to tackle the blight of fly tipping across the borough.

The Everybody Think campaign began with a bold publicity stunt outside the town hall, where an unsightly pile of fly tipped rubbish appeared on Wednesday morning. It was later revealed that the culprits were none other than ‘Dumpit and Scarper’ – a parody created by the council’s communications and marketing team to highlight the problem of illegal, unlicensed small businesses offering low or no cost services to dispose of rubbish only to fly tip it later.

The campaign has been designed to encourage everyone to think about how they dispose of rubbish and unwanted items and to always ask to see the waste carrier’s license if using a third party to collect waste. It will address many of the excuses given by fly tippers such as access and opening times to the borough’s household waste and recycling centres (HWRCs) and the cost of using the council’s own large item collection service.

Both locally and nationally there has been a huge increase fly tipping over the last few years and the annual cost of cleaning up the some 3,800 incidents of fly tipping to Barnsley Council for 2015/16 was over £280,000. Barnsley has a good recycling rate of 54 per cent, demonstrating that many residents are making good use of the waste and recycling services available. This is something the council hopes to build on by asking people to consider donating their reusable items to charity and to identify and sort recyclable materials whenever possible.

Cllr Roy Miller, Cabinet Spokesperson for Place, said: “Fly tipping is something that people feel very angry about because it’s spoiling our beautiful borough. There’s no need to fly tip - there are many easy and affordable ways to dispose of your unwanted items.

“If you’re going to pay someone to collect your rubbish, especially someone who is advertising their services on social media, it’s really important to ask to see their waste carrier’s license or you could be prosecuted and fined up to £50,000 if it’s fly tipped. Everybody think and let’s say “no more”  to Dumpit and Scarper.”

A Facebook page for Dumpit and Scarper will be used to highlight the ongoing issue of fly tipping, with images and CCTV footage of incidents being shared using the hashtag #EverybodyThink  whilst the council’s own social media channels will be used to share important messages around the affordable alternatives to fly tipping. 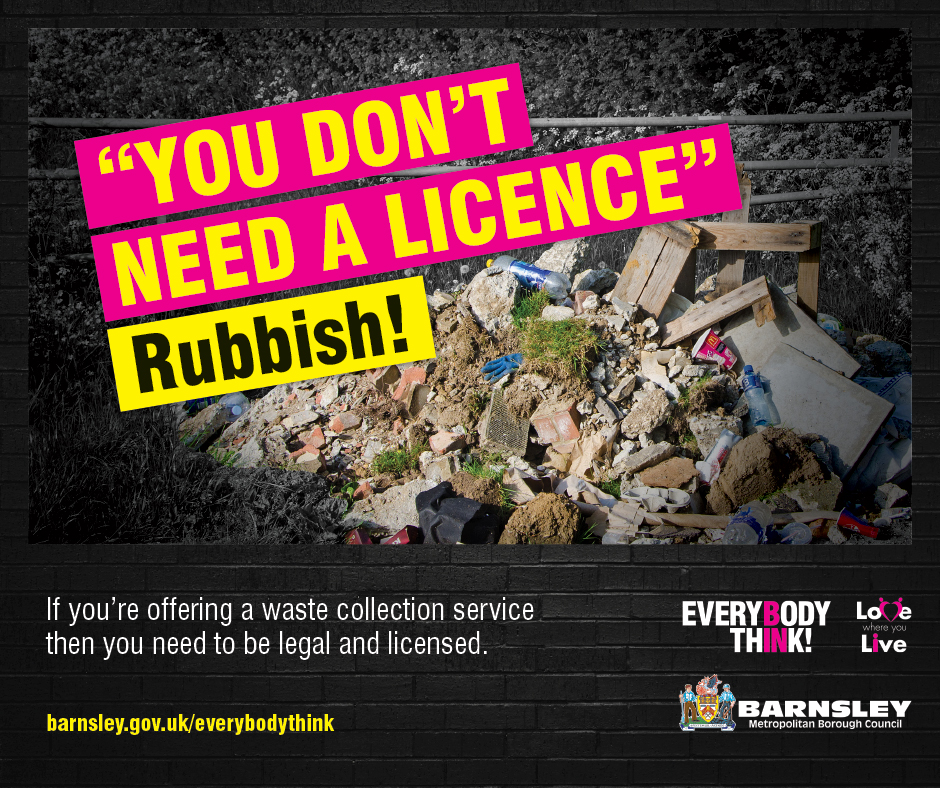