A Barnsley man is facing a fine and costs totalling almost £2,000 for transporting waste without a waste carriers’ licence following an appearance at Barnsley Magistrates Court on Thursday 6 September 2018.

As part of an operation carried out by Barnsley Council’s enforcement team and the police in June 2018, Mr Nicholls was stopped on Sandybridge Lane, Barnsley, and could not produce a waste carriers’ licence for the waste in his vehicle. The vehicle was seized by Enforcement Officers, and an investigation took place which identified further offences relating to the transporting of waste for profit and that his license had been revoked by the Environment Agency.

At the court hearing, magistrates told Mr Nicholls that they believed he knew what he was doing, due to his previous convictions for similar environmental offences and fact he had previously owned a waste carriers’ license. Mr Nicholls was fined £320 and a victim surcharge of £32. He was also ordered to pay to cover investigation time and legal costs, totalling £1,494.06.

Cllr Jenny Platts, Cabinet Spokesperson for Communities, said: “Thanks to our partnership work between our enforcement team and South Yorkshire Police, we have been able to stop another illegal waste carrier in their tracks.

“As part of our #EverybodyThink campaign we will continue to work with the police and the public to tackle environmental crime. Help us to protect our beautiful borough by making sure you only give your rubbish to someone with a valid waste carriers’ licence. If that person has no authority to carry waste, you can be held responsible and face court action.”

To find out more about the work Barnsley council is doing to reduce environmental crime and increase recycling, visit facebook.com/DumpitandScarper or follow the hashtag #EverybodyThink. 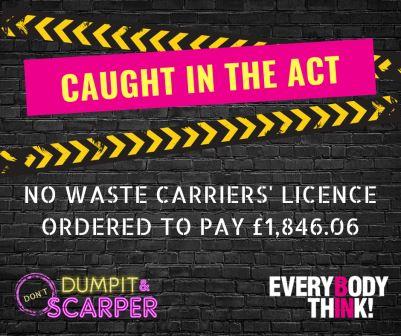