Barnsley Council’s Cabinet members have been informed today that Barnsley museums have performed strongly in Q3, with record visitor numbers reported in November and December.

There was also a reduction in the amount of reported anti-social behaviour incidents.

These are two highlights taken from the council’s quarter three (Q3) performance report 2019/20 (October to December 2019).

The report reveals the progress made during Q3 towards achieving the councils 12 outcomes and three key priorities outlined in the corporate plan.

Here’s a snapshot of highlights and achievements made during quarter three:

The borough’s museums, are really helping to strengthen the Barnsley economy by bringing in a total of 315,239 people in from far and wide to see exhibitions such as the Second World War exhibition at Experience Barnsley, including the dramatic spectacle of a Spitfire outside the town hall, and the Cooper Gallery’s celebration marking 200 years since the birth of writer and art critic John Ruskin, celebrating his most beloved of places - Venice. This contributed an estimated £6.9 million to the local economy.

Reflecting the proactive interventions and joint operations that have taken place this year through the council’s Joining Forces initiative with South Yorkshire Police and partners, reports of antisocial behaviour dropped by 17 per cent compared with the same time last year.

Footfall in Barnsley town centre during this period (1,627,772) has also seen an increase on the previous year, reflecting the impact of the completion of the town centre public realm and the opening of Market Kitchen and JD Sports in October.

Occupancy is also steadily increasing as the market establishes itself and the Glassworks scheme develops. The popular Market Kitchen is now almost 100 per cent occupied and there is now a growing interest in the ground floor Food Hall. It is expected that Q4 will see additional lets in this location.

In creating more and better jobs and good business growth, performance in deciding major planning applications continues to perform well in Q3 with 90 per cent of them being determined on time.

More and better housing is being created – just over 96 percent of its housing stock meets Barnsley Decent Homes Standard and 26 empty properties have been brought back into use which means that the annual target has already been met and exceeded.

Some 334 new homes were built during Q3; 19 of which are affordable homes.

Progress and ongoing improvement have been made under the priority to help people achieve their potential by creating a healthier, safer and better-educated population:

Early Years settings in the borough continue to achieve above national average outcomes at their Ofsted inspections. Currently, 98 per cent of childcare providers have either a good or outstanding outcome compared to 96 per cent nationally and regionally, meaning that children are getting the best start to their educational experiences.

Some 66.4 per cent of pupils in Barnsley are achieving the expected standard or above in combined KS2 reading, writing and maths. Barnsley is now above the national figure of 65.3 per cent. We also outperformed the regional average of 63.4%, and the statistical neighbour average of 64.5%. Results are based on the validated data published in December.

Some 74.1 per cent of Education, Health and Care Plans were issued within 20 weeks, excluding exceptions. Performance at the end of Quarter 3 remains well above the national, regional and statistical neighbour average.

The figure for the number of looked after children in family fostering placements at the end of Q3 was 91.4 per cent, against a target of 90.7 per cent.

287 looked after children were in family placements at the end of December – a record high for the council.

15.4 per cent of referrals in to children’s social care were repeat referrals in Q3 against a target of 18 per cent. This is the lowest reported re-referral rate for more than two years.

Some 128 of 147 (87.1 per cent) Section 47 investigations (investigating situations where a concern has been expressed about the safety and well-being of a child) proceeded to initial child protection conference within 15 days. This is well above the year-end target.

Older people are also being well looked after. 282 people aged 65 and over, and 13 people aged 18-64 have been permanently admitted to residential and nursing care to date. Performance for the 65-plus age group is marginally outside the target in this area. This indicator has shown an improvement in Q3.

Delayed transfers of care attributable to Social Services was 0.2 per 100,000 population for October and November. This is well below the target of 0.7 and performance for this measure ranks in the top 15 councils nationally.

Some 96.3 per cent of Adult Safeguarding Section 42 (an enquiry if there is reason to believe that abuse or neglect is taking place or is at risk of taking place) decisions were made within 72 hours, above the target of 90 percent.

By Q3, the council successfully prevented homelessness in 458 cases, which means it has exceeded its yearly target in this area by almost double.

Barnsley female healthy life expectancy data shows a dramatic improvement of 2.2 years from 2015-17 to 63.2 years by Q3 of this financial year and is closing the gap between Barnsley and England to 0.7 years.

There is also positive news that men’s healthy life expectancy (58.8 years) has increased slightly when compared with earlier time points.

These indicators provide an indication that the Barnsley population is living longer before they may experience ill health. Looking at the borough’s trend data and comparing it to England shows that Barnsley healthy life expectancy rates for both men and women have increased quicker than the England trend.

1,850 people showed that the #OwnIt by volunteering in their communities in Q3, which equates to £101,305 equivalent cashable value.  While there has been a drop again in Q3, take-up of volunteering opportunities is often seasonal and the council is still at 96% of its annual target.

Some 3,585 volunteer hours were completed for Barnsley Museums in Q3, with a cashable equivalent of £48,440

When it comes to looking after the borough, during Q3:

Some 99 per cent of category 1 (most serious) pot holes were repaired within 24 hours, against a target of 95 per cent.

As well as filling potholes, some 80 per cent of the total highways cost (revenue and capital) was spent directly on road and footpath repairs, so the council is currently exceeding its target of 70.35 per cent. The total collective spend over Q1, Q2 and Q3 for Highways and Engineering was £18.649M, of which £14.831M was spent on road repairs.

In Q3, the council derived enough energy from waste to power 2,976 homes and is on track to comfortably exceed its annual target.

Finally, the increasing amount of digital options meant that 65.8 per cent of contacts with the council were made online during Q3, a slight increase on last quarter’s figure. The council’s Digital Champions continue to run regular sessions in community venues to help people gain the skills and confidence to access services and information online. 622 people took part in 141 sessions with 261 hours of training during July, August and September.

The report also identifies a number of key areas for improvement, including the number of apprentice starts each year as a percentage of the overall council workforce; the number of private sector jobs created; and the amount of energy used by the council derived from renewable sources.

The report can be read in full here.

More information about how the council measures its performance, along with the latest data is here: https://www.barnsley.gov.uk/services/our-council/our-performance/how-we-measure-our-performance/ 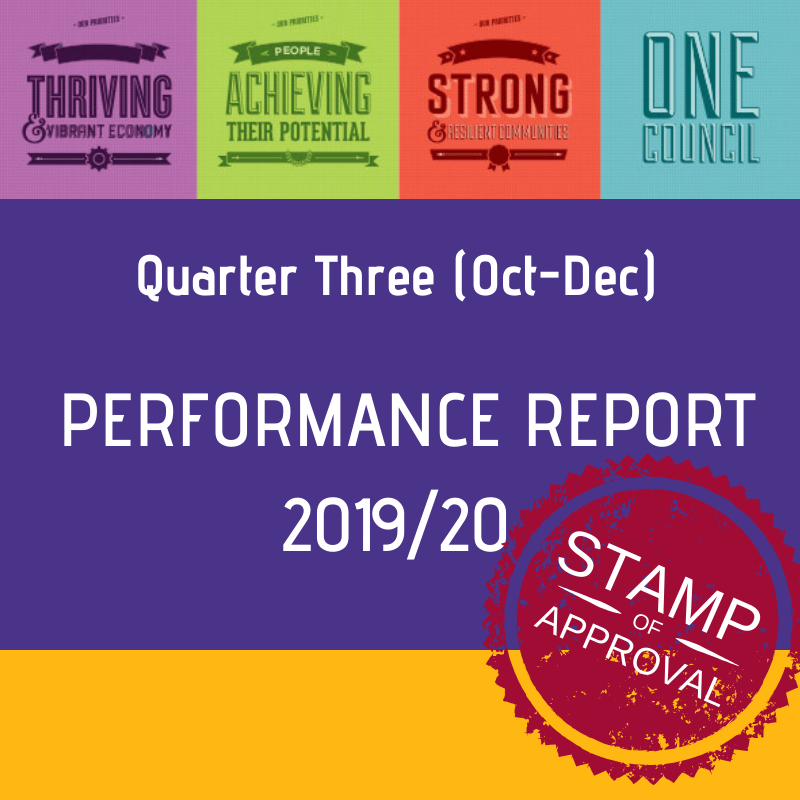