Barnsley Council’s Cabinet members have been informed today that the number of Barnsley 16 and 17 year olds on apprenticeships is 11.3 per cent. This exceeds last years’ figure for the same month by 3.3 percentage points, and is higher than comparator figures for Yorkshire and Humber (8.3 per cent) and National 5.9 per cent.

Only 9.1 per cent of Barnsley 16 and 17 year olds are not in employment education or training or not known and Barnsley continues to outperform the regional average.

These are just two highlights taken from the council’s quarter two (Q2) performance report 2019/20 (July to September 2019). The report reveals that during Q2 progress continues to be made towards achieving the councils 12 outcomes and three key priorities outlined in the corporate plan.

Here’s a snapshot of highlights and achievements made during quarter two:

In creating more and better jobs and good business growth, performance in deciding major planning applications is exceptional at Q2 with 100 per cent of applications being determined on time, or an alternative date agreed with the applicants. The council has also helped 33 new businesses to start trading and supported 25 businesses to expand.

Footfall in Barnsley town centre was 1,521,420 with events such as the Barnsley Crit, Dancing Town, Barnsley’s Big weekend which featured the grand opening of the Library@the Lightbox, the Mayors Parade, a 5k run, Pride Barnsley and Destination Barnsley.

It’s great news for the borough’s museums, which are helping to strengthen the Barnsley economy by bringing people in from far and wide. A total of 428,729 people visited Barnsley museums during Q2, contributing just over £8M to the local economy. The combined contribution to the economy from the six Barnsley venues including Wentworth Castle Gardens is £9.5M.

Museum visitors increased by 11 per cent - an additional 38,894 compared to Q2 last year. With the inclusion on Wentworth Castle Gardens, this increases to 24 percent and 81,785 additional visitors. The combined attractions are on course to exceed targets and establish new annual records.

The council is also creating more and better housing - some 96 percent of its housing stock meets Barnsley Decent Homes Standard and 40 empty properties have been brought back into use since July 2019, which is 85 percent of the annual target already.

It’s also excellent news for the council’s ambition that every child attends a good school and is successful in learning and work. Some 98 per cent of Barnsley’s early years and childcare settings received ratings of good or outstanding from Ofsted at their last inspection; this is above national and regional comparators. 20% received the highest 'Outstanding’ outcome and 78% achieved a 'Good' outcome.

Take up of two year old’s entitlement to free childcare/education has increased this quarter and the figure is currently 75 per cent against the target of 73 percent. This follows targeted work to identify families who were eligible but had not applied. Social media campaigns, and outreach work by family centres to encourage take up and address barriers to take up has seen an increase in the numbers of families accessing provision.

Older people are also being well looked after - timeliness of adult social care reviews has improved in Q2, and is now at 81 per cent against the year-end target of 83 per cent.

Some 97 per cent of Adult Safeguarding Section 42 (an enquiry if there is reason to believe that abuse or neglect is taking place or is at risk of taking place) decisions were made within 72 hours, above the target of 90 percent.

In Q2, the council successfully prevented homelessness in 146 cases, which means it has now met its yearly target in this area.

There is further good news in that Barnsley volunteers continue to #OwnIt – 2,653 people volunteered in their communities in Q2. This is a slight fall in numbers since the last quarter, but reflects the increased time spent by the teams in developing new groups than supporting individual volunteering activity. 521 were new volunteers, which is a slight increase on last quarter. Volunteering in Q2 equates to £158,425 equivalent cashable value. Some 4,506 volunteer hours were completed for Barnsley Museums in Q2, with a cashable equivalent of £60,876.

When it comes to looking after the borough and communities, during Q2 CO2 emissions have continued to fall from the 2012 baseline giving a total reduction of 45 per cent - well above our baseline of 30%.

99.9 per cent of category 1 (most serious) pot holes were repaired within 24 hours; and

96.7 per cent of all refuse collections were made on the scheduled day.

The increasing amount of digital options meant that 65.1 per cent of contacts with the council were made online during Q2. The council’s Digital Champions continue to run regular sessions in community venues to help people gain the skills and confidence to access services and information online. 556 people took part in 126 sessions with 229 hours of training during July, August and September.

The report also identifies a number of key areas for improvement, including the number of apprentice starts each year as a percentage of the overall council workforce; the number of private sector jobs created; the significantly higher rates of alcohol-related hospital admissions for both males and females; and the slight increase in the number of fly-tipping incidents.

The report can be read in full here.

More information about how the council measures its performance, along with the latest data is here: https://www.barnsley.gov.uk/services/our-council/our-performance/how-we-measure-our-performance/ 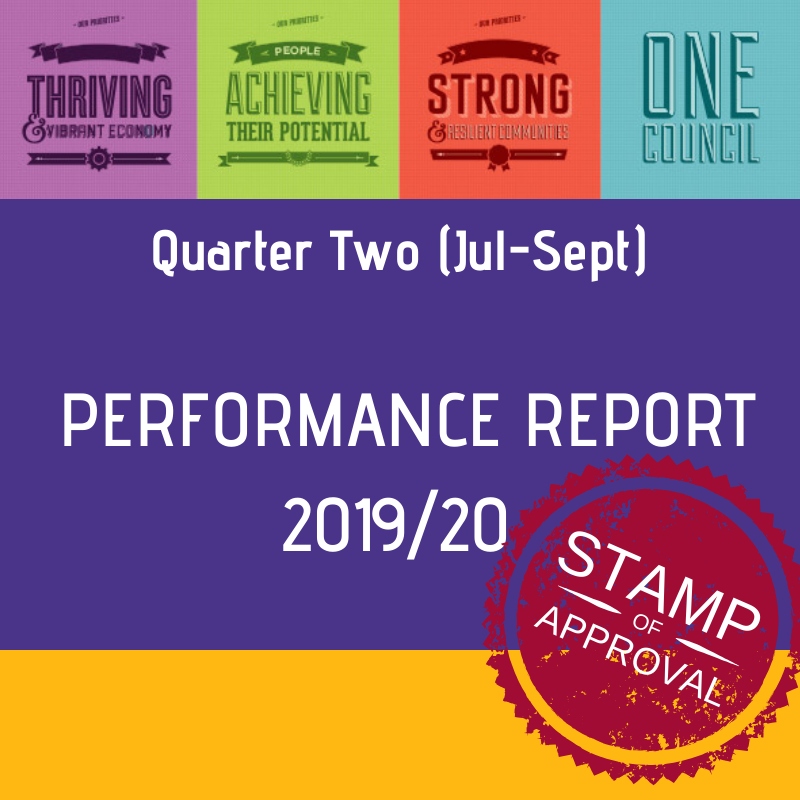