Health campaigners are warning that new evidence suggests lockdown has left more children exposed to the harms of secondhand smoke.

The warning comes today from Action on Smoking and Health (ASH), British Lung Foundation, Fresh and Breath 2025 as evidence from the YouGov COVID tracker [2] shows that people who live in households that include children are 50 per cent more likely to report being exposed to secondhand smoke since lockdown compared to those without children (10 per cent compared with 6 per cent). A further 12 per cent of smokers who live with children report they are smoking indoors more than they did before lockdown.

YouGov’s covid-tracker found that parents who smoke are just as likely as other smokers to report making quit attempts and trying to reduce the amount they smoke since lockdown. However, the indication that lockdown is leading to more frequent exposure to secondhand smoke has raised concerns that they are not getting the right support to quit and to protect those around them from tobacco smoke at this time.

Deborah Arnott, Chief Executive of ASH which is leading a campaign to encourage smokers to QuitForCovid said: “This is an issue of equity. If you live in a high-rise block taking your smoke outside is much harder than in a semi-detached with a garden.

We know parents who smoke are trying to quit and reduce the amount they smoke and we need to make sure they have the support the need to do this. I urge smokers to get in touch with local services and to use other sources of nicotine as an alternative to smoking indoors if they need help to handle cravings. They can find out more at www.todayistheday.org.uk”

Among adults exposure significantly increases the risk of stroke and, coronary heart disease (CHD) and lung cancer in non-smokers.

Some 85 per cent of secondhand smoke is invisible and odourless but many people are not aware that steps like opening a window, smoking by the back door or smoking in another room do little to protect children and other non-smoking adults.

Respiratory consultant Dr Nick Hopkinson, Medical Director at British Lung Foundation and Chair of ASH said: “Exposure to secondhand smoke is one of the leading causes of poor respiratory health in children. Smokers need to take their smoke outside but should try to quit if they can. Using alternative sources of nicotine like patches, gum or e-cigarettes can help reduce craving and protect them and their loved ones, especially children, from harm.”

Cllr Jim Andrews, Barnsley Council’s Cabinet Spokesperson for Public Health added: “We are committed to protecting children and young people from the dangers of secondhand smoke. Evidence shows that if young people see smoking as part of everyday life they are more likely to smoke themselves. We have already introduced a number of smokefree areas throughout the borough through our Breathe 2025 ambition, and we hope to vastly reduce the amount of children and young people picking up the habit to inspire a smoke-free generation.”

Smokers can find out how to get help with their quit attempts by visiting www.todayistheday.co.uk and ask questions of leading experts by tweeting @QuitforCOVID. 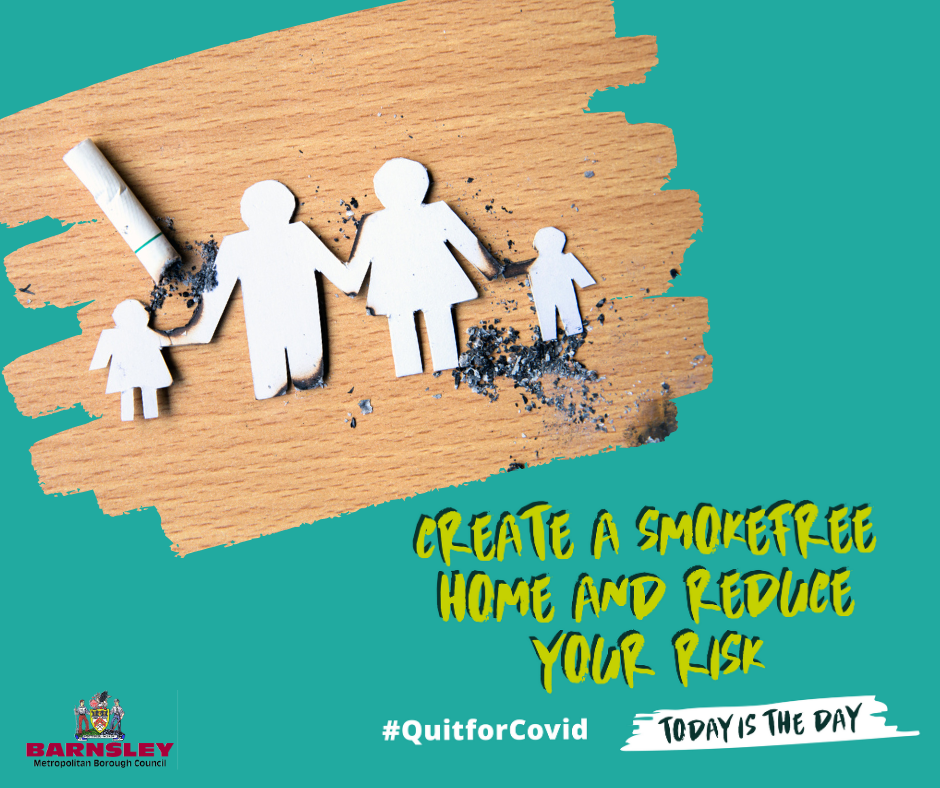