This week, we were delighted to commemorate the upcoming 50th anniversary of Barnsley’s official twinning with Schwabisch Gmund in Germany. To mark the occasion, we welcomed ‘Sigmund’ to Barnsley – a giant willow sculptured unicorn which is the logo of Schwabisch Gmund.

Barnsley and Schwabisch Gmund were officially twinned by a partnership on 24 June 1971, but exchange visits between students, parties and civic dignitaries started well before then. It all began way back in 1954 when a youth party from Schwabisch Gmund were due to visit South Wales but an outbreak of ‘Foot and Mouth’ disease meant that the visit was abruptly cancelled. This unfortunate turn of events did not go unnoticed by Arthur Williams who was then a member of Barnsley Council. In-keeping with Barnsley’s welcoming and friendly ways, we made it possible for the group to visit our very own Scout Dyke Camp. The visit was a huge success and led to regular youth exchange visits.

Since then, groups from both communities - ranging from bands and choirs to sports men and women, have visited each other regularly. The twinning proved so successful that in 1978 the Barnsley Schwabisch Gmund Society was formed, to further friendly links between the two communities.

To celebrate the anniversary, we had several plans in place - but sadly, due to the pandemic and travel restrictions, these plans have been put on hold this year. It’s hoped that next year, celebrations will be hosted in both towns to mark the huge milestone. However, not to let the occasion go unnoticed in the meantime, the Mayor of Barnsley, Leader of the Council and Cllr Steve Green were joined by members of the Barnsley Schwabisch Gmund twinning Society to welcome ‘Sigmund’ the unicorn. This fitting tribute to the anniversary forms part of the Fantastical Beasts event being held in Barnsley.

“It’s a real shame we are unable to give the anniversary the celebration it deserves this year, but we will definitely make up for it next year. The history and stories behind the twinning is lovely and we even have a direct link to where it all began in our present council as our very own Cllr Steve Green is related by marriage to Arthur Williams who started this amazing partnership.”

Sigmund the Unicorn is part of Twisted: Barnsley’s Fantastical Beasts, a series of giant willow sculptures which will be in locations across Barnsley town centre from Saturday 29 May to Sunday 13 June. This free family trail is inspired by local creatures and legends and features sculptures designed by six renowned artists from across Yorkshire and the North.

Visit barnsley.gov.uk/events to download a trail map and a fun card game where you compare the strengths of each of the fantastical beasts. 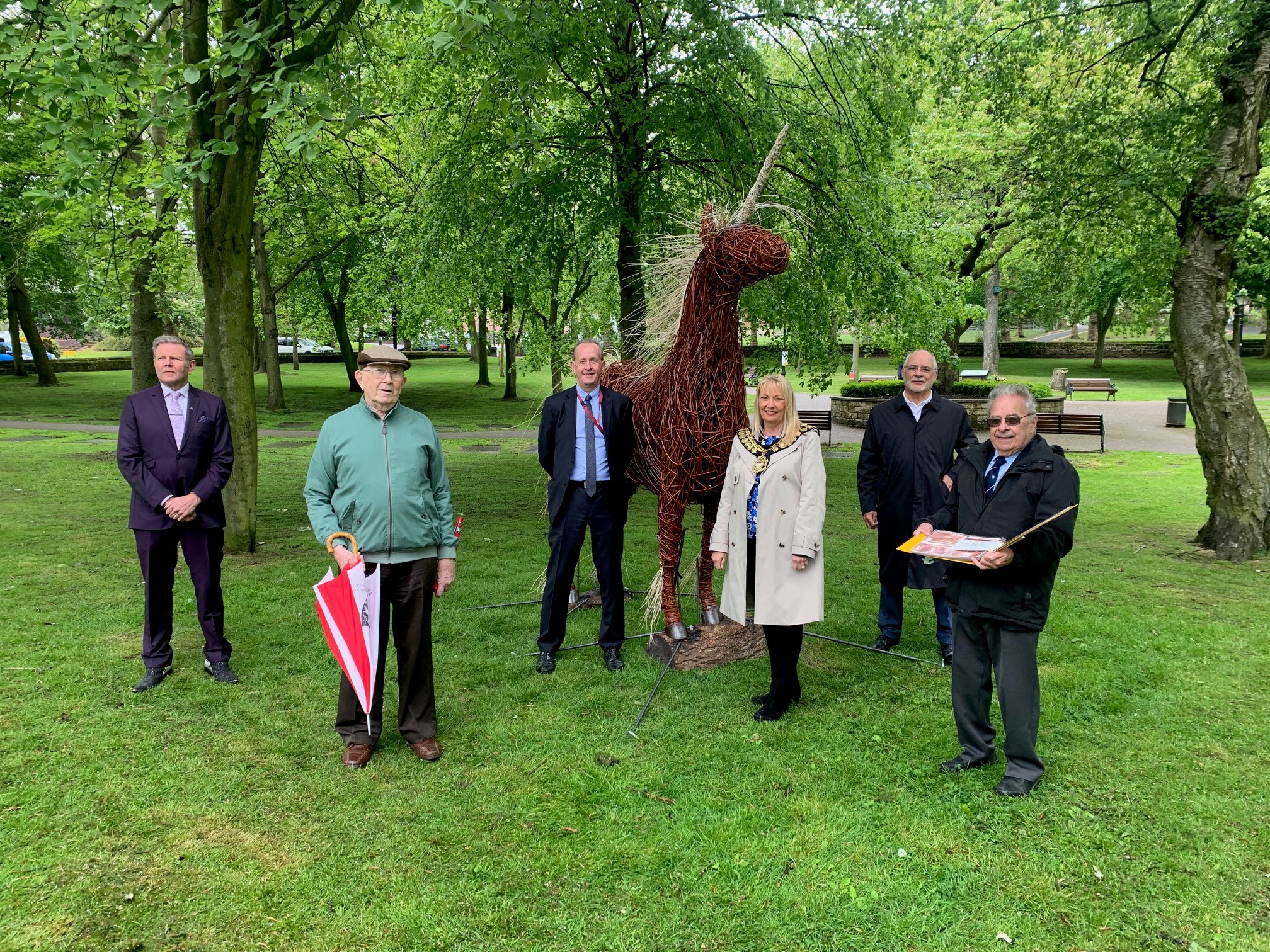