Monday 18 October 2021 marks the launch of National Adoption Week 2021, which will aim to educate and inform people on the process of modern adoption.

The week will include a rounded, honest, and inclusive portrayal of the journey, showcasing the highs and lows and champion all the voices involved in the process that are often less heard. These include adopted children, adopted adults, adoptive parents, birth parents, and the adoption and social care workforce who work tirelessly to get children into loving permanent homes.

To mark the week, the National Adoption Recruitment Steering Group (NARSG) has released two new surveys looking at the nation’s understanding of modern adoption and exploring experiences of those personally or professionally involved. The research shows the reality of adoption in 2021 – the many benefits, the challenges, and the perception gaps still to be addressed. In Yorkshire and the Humber, nearly half (51%) believe adoption is more socially acceptable than it was ten years ago, yet still more than a third (40%) admit they find adoption a difficult topic to speak about.1

Despite the need for more to be done for the public to better understand adoption, one in five (26 per cent) adults say they would consider adopting in the future, and nearly nine in 10 (85 per cent) believe that adopting a child would be rewarding.1 In the past ten years, 40,920 adoptions have taken place in England, the vast majority of which have been incredibly beneficial and positive to the children and families involved.2

A survey of those within the adoption community, who have either adopted or work as an agency or social worker, revealed that 94 per cent think adoption today still has challenges to overcome. According to the workforce, the main challenge is how best to acknowledge a child’s birth family, heritage, and culture. Eight in 10 (82 per cent) also believe the birth mother’s experience can be overlooked.

National Adoption Week this year aims to shine a light on the real-life stories of those working directly to help provide safe and loving homes for children and acknowledge others impacted by adoption. Over two thirds (69 per cent) of the adoption community believe the children’s social care workforce don’t receive enough respect for their work. A further nine in ten (88 per cent) working in the sector admit to feeling undervalued in their role, though 80 per cent would still recommend their job to others.3

National Adoption Week brings some of these issues and voices to the forefront in an emotive, short film by illustrator and adoptive parent Garry Parsons. The four-minute animated film features the life stories and real voices of six people who have had their lives changed by adoption: birth mother Anna*, single mum and adopter Sarah*, social worker Paula, 11-year-old Roman who was adopted age five, 19-year-old Tiegan who was adopted age four, and Sue who supported her daughter through the adoption process.

Tiegan, 19, who features in the short film, said: “Being adopted has been an incredibly positive experience for me. I love my adoptive mums and have good relationships with many birth relatives, but it is important people don’t look at adoption with rose-tinted glasses. Growing up would have been much easier for me if people had a better understanding of adoption and how this shaped me as a person.”

Sarah Johal, member of the National Adoption Recruitment Steering Group and National Adoption Strategic lead, said: “Over the past 50 years, more than 400,000 children have been adopted, each with their own unique stories to tell. While adoption has been an incredibly rewarding experience for many of these children, we cannot underestimate the complexities of adoption and its historical difficulties. National Adoption Week is a chance for every single person touched by adoption to feel seen, heard, valued and understood.”

With 2,100 children currently waiting to be adopted, National Adoption Week sets out to educate people about how to adopt4. Despite the fact most people are likely to be able to adopt, and 46 per cent of people in Yorkshire and the Humber know something about eligibility, applications, and the support available to adopters, 77 per cent of adults in the region say they don’t have a good understanding of how to start the process.

Further showing the need to continue educating people about adoption today, in Yorkshire and the Humber, over half (57 per cent) were not aware that adoption should only be considered as a last resort for children after all other options are explored.1

Stephanie Evans, head of One Adoption South Yorkshire, said: “Here at One Adoption South Yorkshire, we are proud to support this year’s National Adoption Week. It is not only a chance to celebrate adoption and hear the voices of all those involved, including the wonderful work of our adoption teams across the region; it is also an opportunity to highlight adoption as an option for some of our most vulnerable children and support anyone considering adoption as a pathway to creating a family.”

A series of events offering insight, advice, and support to adopted adults, adopters, birth families and adoption professionals will be taking place from Monday 18 October. To find out more about National Adoption Week or to seek information or support, visit www.youcanadopt.co.uk/NAW. 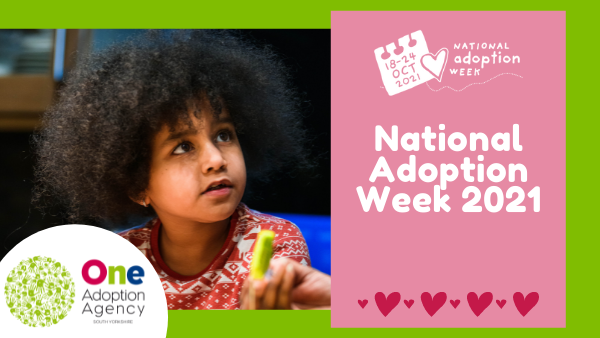