Barnsley’s historic town hall lit up blue on Thursday night as a mark of respect for key workers fighting the COVID-19 pandemic – and the man behind it has his own reason to thank the NHS.

Last summer, local businessman Shaun Collins, 52, found himself in a Barnsley Hospital intensive care unit, paralysed and fighting for his life after a bout of food poisoning led to serious complications.

“I’d become ill with food poisoning - but it quickly became apparent something wasn’t quite right,” he said.

Shaun was taken to hospital after calling 111, and shortly after collapsed. NHS specialists carried out several tests – and the results were terrifying.

Results showed that the food poisoning had developed into a rare and severe illness that attacked Shaun’s nervous system - leaving him completely paralysed.

Shaun also temporarily lost his ability to communicate, and his eyesight became so limited he had to wear a blindfold as the illness continued to take hold.

He spent three weeks in intensive care battling for his life – before slowly showing signs of improvement.

It led to a long recovery process, with Shaun still undergoing rehabilitation. And he says without the treatment he received from Barnsley Hospital, he may not be around today.

“I’m still recovering now, but I’m not sure I’d be here without the NHS,” he said.

“I was on one of the same assisted breathing machines that so many people are now using. If it wasn’t for the care and dedication of the NHS I wouldn’t be here today.

“That’s why I wanted to say thank you, and the opportunity to light up our town hall alongside the council was the perfect way to show my gratitude.”

Working alongside the council and its events team, Shaun’s company 52nd Street lit up the town hall on Thursday night at 8pm as part of the weekly show of appreciation for key workers.

“The NHS does fantastic work day in, day out, and that’s clear for the world to see as it leads the fight against the coronavirus pandemic,” he said.

“All key workers are doing an amazing job, but there will always be a special place in my heart for the NHS.”

Sir Stephen Houghton MBE, Leader of Barnsley Council, said: “Lighting up our historic town hall was the least we could do to show our respect and appreciation for key workers across the borough.

“Key workers include our own staff, who I know are going above and beyond to keep Barnsley going through these unprecedented times.

“On behalf of the council, I want to say a huge thank you to the NHS and key workers across the town for their hard work and dedication during the coronavirus pandemic. We will beat this, and the good times will soon return.”

The town hall project was also supported by local company Deadline Digital, while footage will also be used for a documentary by local producer Wayne Sables. 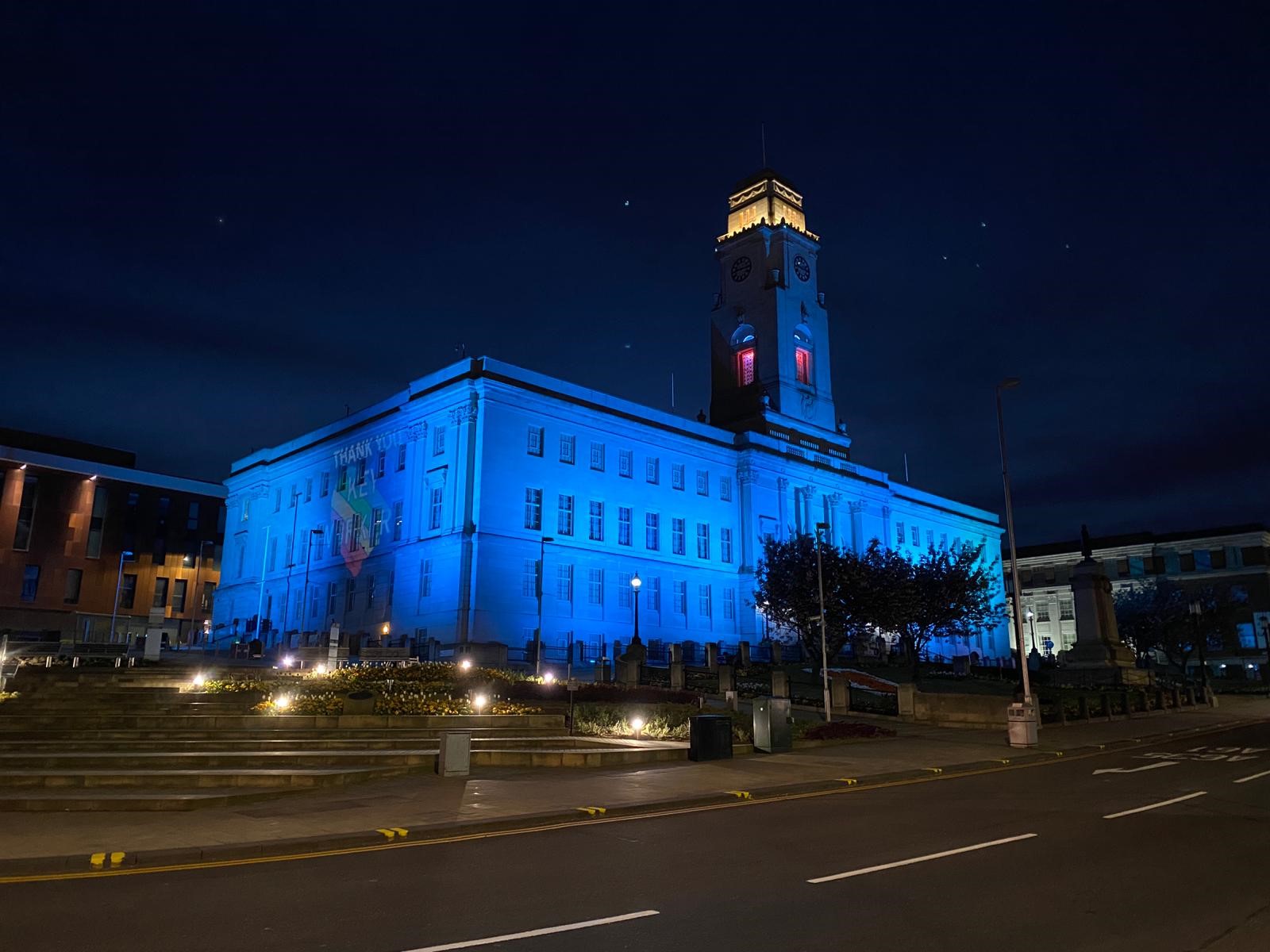