The Mayor is a ceremonial post held by a member of the council and elected annually. The Mayor is the town's first citizen and has the civic responsibility of representing and promoting the borough.

The first mayor of Barnsley was Henry Richardson who was appointed in 1869 and the first female mayor, elected by a Labour-controlled council, was Mary Brannon in 1956.

Barnsley has had 151 mayors – the current Mayor, Cllr Caroline Makinson has just reprised the role for a second term.

Role of the Mayor

The Mayor supports a wide variety of events throughout Barnsley, as well as representing the borough at national and international events, functions and engagements, including:

Our current mayor, Cllr Caroline Makinson was first appointed the role as Mayor of Barnsley in October 2020 - six months later than the traditional Mayor Making ceremony, which is usually held in May. This delayed start was due to the Covid-19 pandemic which not only delayed the start of the term but also greatly impacted the mayor from carrying out her mayoral role during her term from October 2020 to May 2021.

As a result, it was decided that Cllr Makinson would reprise her role for another full term for 2021 to 2022.

Born and raised in Barnsley Town Centre, Cllr Caroline Makinson has lived in Royston for 15 years and prior to that Shafton for 16 years. She has two daughters and a stepson and daughter.

After working for various well-known Barnsley companies in the private sector, Caroline had a change of career and joined the voluntary sector, working for Voluntary Action Barnsley for 13 years in Community Development and Neighbourhood Management roles. She developed and delivered training programmes working closely with BMBC officers, Councillors, local organisations and volunteers. The programme was subsequently bought by other Local Authorities.

As a result of this work, Caroline became interested in Politics and joined the Labour Party and was elected to represent the Royston Ward in October 2013. Her background in community development has been a huge benefit to her as a local councillor.

Cllr Makinson’s husband Barry, is her consort during her term of office. Born and raised in Shafton, Barry left school at 16 and went to work at Ferrymoor Ridings Colliery, South Kirkby. He left the mining industry in 1989 due to pit closures and became self-employed, setting up his own window cleaning business, which he is still operating. Barry enjoys most sports, family holidays, gardening and woodworking.

Find out more about what our Mayor has been up too.

Inviting the Mayor to an event

The Mayor is always happy to help promote events and causes that raise the profile of Barnsley and its people, both in the borough and beyond.

The Mayor's diary is busy and fills up quickly, so please give as much advance notice as possible if you'd like to invite them to your event - at least 10 days.

To invite the Mayor please complete our online form. We'll let you know if your invitation can be accepted.

Please note that the mayor will only be able to attend events that follow the latest Covid-19 guidance.

Please note, all events listed below are provisional and will be reviewed closer to the time for any COVID-19 government restrictions that may be in place.

Councillor Sarah-Jane Tattersall has been appointed as Deputy Mayor for 2021 to 2022. Cllr Tattersall was elected in 2012 to represent the St Helens Ward.

Raised in Barnsley, Cllr Tattersall spent her teenage years as an Air Cadet at 148 Barnsley Air Training Corps. During this time, she undoubtedly gained many skills to develop military check and challenge problem-solving solutions -along with many other invaluable life skills. In addition to the skills gained via the Air Cadets, Cllr Tattersall also successfully completed the Bronze, Silver and Gold Duke of Edinburgh Award schemes.

After leaving school, Cllr Tattersall went on to work in the retail industry before starting a family. Cllr Tattersall went on to have two sons who are now grown up. Whilst her boys were young, she attended playgroups and gained a passion for volunteering opportunities. This voluntary work was the start of her passion for the voluntary sector and eventually led to her being elected to the St Helen’s ward as Labour Councillor.

Cllr Tattersall is extremely passionate about her work and thoroughly loves the people and borough of Barnsley. As Deputy Mayor and hopefully Madam Mayor in 2022, she will do her utmost to continue her commitment to strong community health and wellbeing.

When Cllr Makinson was first appointed Mayor in October 2021, her chosen charities were Beacon South Yorkshire Carer Support and TADs. Like most charities, the pandemic has had a huge impact on these two charities and greatly reduced the opportunities for the mayor to raise funds through charity work.

The mayor has therefore decided to continue supporting the same charities for the coming mayoral year.

They are a caring group of people who are living/have lived with addiction in the family unit. Beacon South Yorkshire Carer Support is a voluntary organisation and with the help of their supporters and dedicated volunteers they have developed a programme which includes: social events, coffee mornings, support and beauty therapies, telephone support helpline, one to one support sessions and group support sessions.

Beacon South Yorkshire Carer Support also has two unique programmes to help you on your journey:

The Stepping Stones programme is structured into 7 steps and you will be assigned someone to support you throughout the programme. Begin your journey at Step 1 (Awareness) and once you reach Step 7 they will begin supporting you with aftercare.​

The Next Phase Programme follows on from Stepping Stones after evaluation and feedback. The programme includes sessions on communication, drug and alcohol awareness, preparation for working life (CV writing and application forms) and finally they will support you to find volunteering opportunities.

Contact Beacon South Yorkshire Carer Support if you would like to get involved or make a donation.

TADS was born in January 2014 when a group of women in Barnsley, that had experienced mental health issues themselves, came together to offer some support to others.

TADS offers workshops to increase knowledge of mental health and coping techniques as well as one to one coaching sessions to people who struggle in group sessions.

Find out more information about TADS and how you can show your support.

Make a donation to TADS.

The mayoral theme for 2021-22 will continue to be children and young people.

The Mayor feels like that now more than ever we need to support this generation as they have been really affected by Coronavirus pandemic and could be for years to come. The Mayor is really looking forward to offering support and to shine a light, celebrate and build on all the positives that they are achieving. 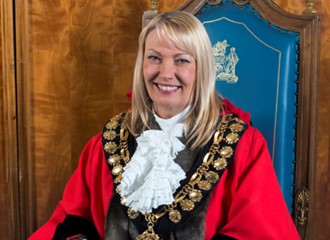