The Mayor is a ceremonial post held by a member of the council and elected annually by the council. The Mayor is the town's first citizen and has the civic responsibility of representing and promoting the borough.

The first Mayor of Barnsley was Henry Richardson who was appointed in 1869 and the first female Mayor, elected by a Labour-controlled council, was Mary Brannon in 1956.

Barnsley has now had 150 Mayors.

Born and educated in Wath upon Dearne, Cllr Pauline Markham has lived in Darfield for the past 21 years. She has a son and a daughter who now both live in Australia. After raising her family she went to work at Morrison’s at Cortonwood. She became the union representative for USDAW and under her leadership membership grew. The union recognised her potential and Cllr Markham was seconded to work full time for the union. She's still a full member of USDAW and is branch secretary for South Yorkshire Morrison’s.

As a result of her union work Cllr Markham became interested in politics and joined the Labour Party. She was elected to represent the Darfield ward in May 2010.

Cllr Markham’s husband Larry is her consort during her year in office. Born and raised in Bolton upon Dearne, Larry left school at 15 and started work at the Co-op. He then moved to work at what was then known as the Dale and Brown Glassworks. He worked in the glassworks industry for the rest of his working life. Now retired, Larry enjoys football, his garden and has a love of nature.

Role of the Mayor

The Mayor supports a wide variety of events throughout Barnsley, as well as representing the borough at national and international events, functions and engagements, including:

Inviting the Mayor to an event

The Mayor is always happy to help promote events and causes that raise the profile of Barnsley and its people, both in the borough and beyond.

The Mayor's diary is busy and fills up quickly, so please give as much advance notice as possible if you'd like to invite them to your event - at least 10 days.

To invite the Mayor please complete our online form. We'll let you know if your invitation can be accepted.

Please note, due to COVID-19 (coronavirus) there are some changes to mayoral events.

Cllr Caroline Makinson was elected in October 2013 and represents the Royston Ward.

Caroline works closely with the community and voluntary sector in Royston. She's chair of the Royston Ward Alliance (which covers part of Carlton village too), and sits on the management committee for Royston and Carlton Community Partnership.

Age UK Barnsley is an independent registered charity founded in 1974. Their ultimate aim is to support the health and wellbeing of all older people living in Barnsley.

Age UK Barnsley is a brand partner of the national Age UK charity. This means they work together to campaign, work to a shared quality standard and share research. However, they're two separate organisations - Age UK Barnsley is a local charity and all monies raised by Age UK Barnsley are spent directly on support and services provided by them across the borough.

Age UK Barnsley is able to support and provide services to approximately 1,500 older people on a regular basis. They provide a range of services and offer support in a number of ways, including ongoing social activities, events and classes, day care to address issues such as social isolation, accessing mobility scooters or wheelchairs, and social inclusion projects.

Like many charities, Age UK Barnsley is supported by donations from the public, income from their charity shops, local fundraising and some charitable grants. They rely on this support to keep serving the community, with any help being greatly appreciated.

Take a look at how you can get involved and show your support.

BIADS is a local independent charity formed by Barnsley people to provide support to residents across the borough who have any form of dementia, as well as their families and friends.

BIADS provides support to those living with or affected by dementia by providing information, emotional support, social opportunities, meaningful activities and events – enabling members to live well with dementia in the community.

As a local independent charity, BIADS can guarantee that all funds raised and donations received will be used in Barnsley. They're constantly looking for ways to raise funds in order to continue running these services in Barnsley. They rely on fundraising activities, volunteers and donations.

Take a look at how you could get involved.

The mayoral theme this year is loneliness - not just among the elderly but across all generations.

The Mayor feels strongly about addressing loneliness within communities and drawing on the amazing community spirit to tackle this problem together. 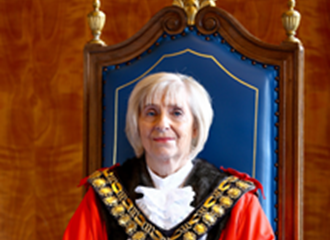