As part of our borough-wide initiative to help provide reassurance and keep residents safe, we're 'Joining Forces' with our key partners.

Joining Forces brings together key members of staff from the council and South Yorkshire Police. As part of the move, South Yorkshire Police's safer neighbourhood service along with our markets and parking services will be based at the Glass Works. This allows the delivery of our partnership approach from a central location at the heart of the town centre redevelopment.

What this means for you

Watch our video about Joining Forces

Watch our videos about Joining Forces in Barnsley town centre

Joining forces brings together Barnsley Council, South Yorkshire Police and other partners to make Barnsley a safe and welcoming town for our residents and visitors. We have a centralised team based at The Glass Works at the heart of the town centre redevelopment.

In the video below, Paul, one of our Town Centre Wardens talks about his role and how the wardens can help Barnsley be a safer and happier place to shop.

In the video below, Paul, one of our Town Centre Wardens talks about his role in enforcing the town centre Public Space Protection Order.

Watch our video about Joining Forces across Barnsley

Watch our video about homelessness and recovery steps

Report something to us

Tell us about something else.

Police and Communities Together (PACT) meeting

We've been carrying out street surgeries outside; dates of these are posted on the team’s social media channels. If you see your constables and Police Community Support Officers (PCSOs) out on foot, please stop us for a chat.

For incidents and crimes that are ongoing, phone 101 or 999 as applicable.

Crime and antisocial behaviour update - "You said, we did"

On Thursday 14 April, the team joined forces with Barnsley Council town centre Wardens to conduct Operation Sidewinder. This is a passive drugs operation with the town centre, covering over 5km within 3 hours and encompasses the ASB hot spots, including Peel Parade, the Barnsley Interchange and Mandela Gardens.

This resulted in 19 stop/searches from which one male was referred to Humankind for drug intervention, one male was reported on summons to attend court and three Public Spaces Dispersal Orders (PSPO) were served.

Officers also seized an e-scooter for riding on public land and highways, which is an offence under the Road Traffic Act. You can read the e-scooter trials: guidance for users on GOV.UK. 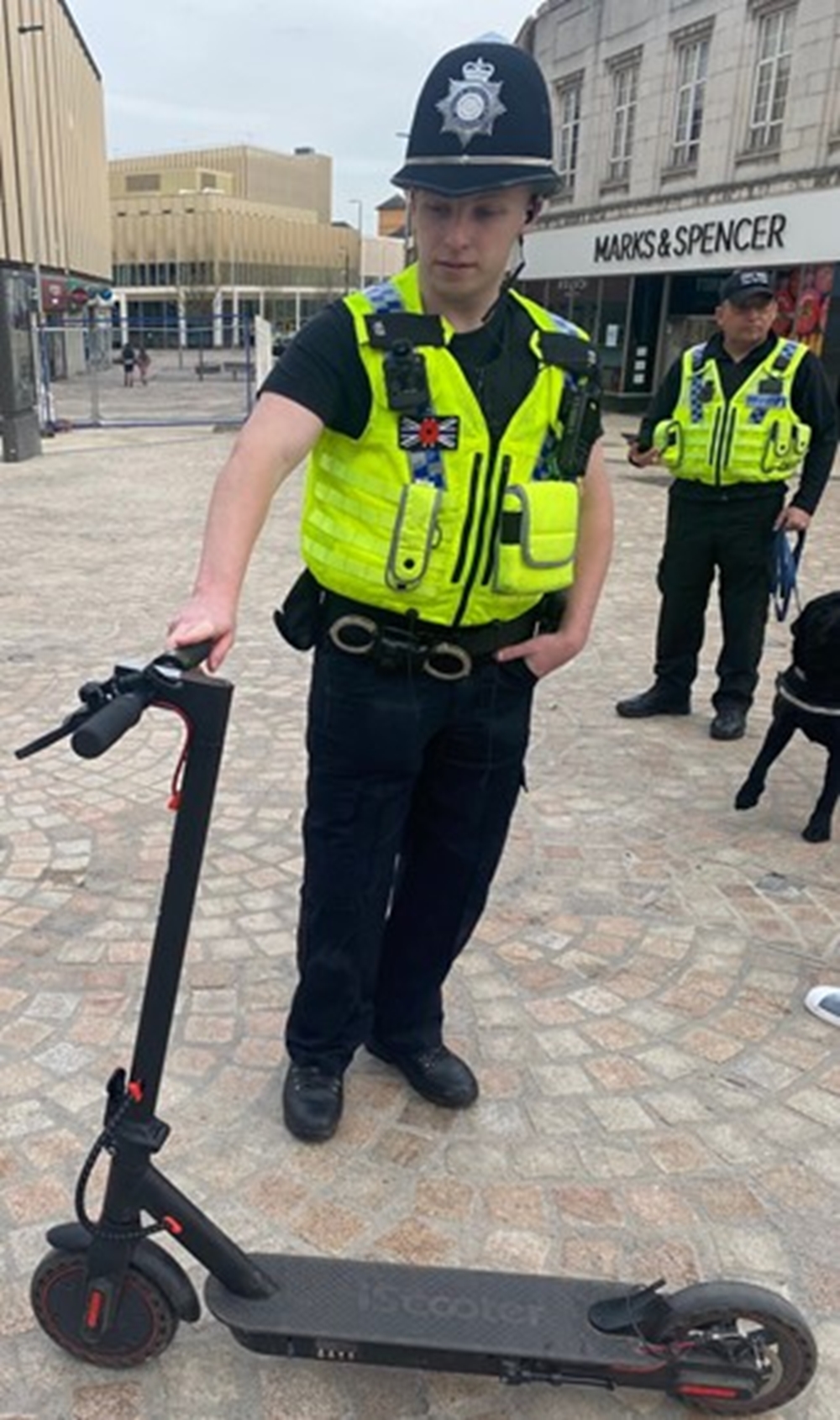 What your neighbourhood team have been doing

On Tuesday 12 April, Barnsley Neighbourhood Policing Team held an Emergency Services event outside the Glassworks building in the town centre.

The public met the team, colleagues from the Yorkshire Ambulance Service and Air Ambulance, South Yorkshire Fire and Rescue and the Yorkshire and Humber Marine Unit. Service demonstrations were held and the public were able to look at the emergency vehicles. Members of the public were shown how to do Cardio Pulmonary Resuscitation (CPR), saw the Air Ambulance helicopter simulator and met their local officers, including our latest recruit, OK9 well-being dog Barney.

During the day, donations to the total of £596.24 were collected for the Yorkshire Air Ambulance. 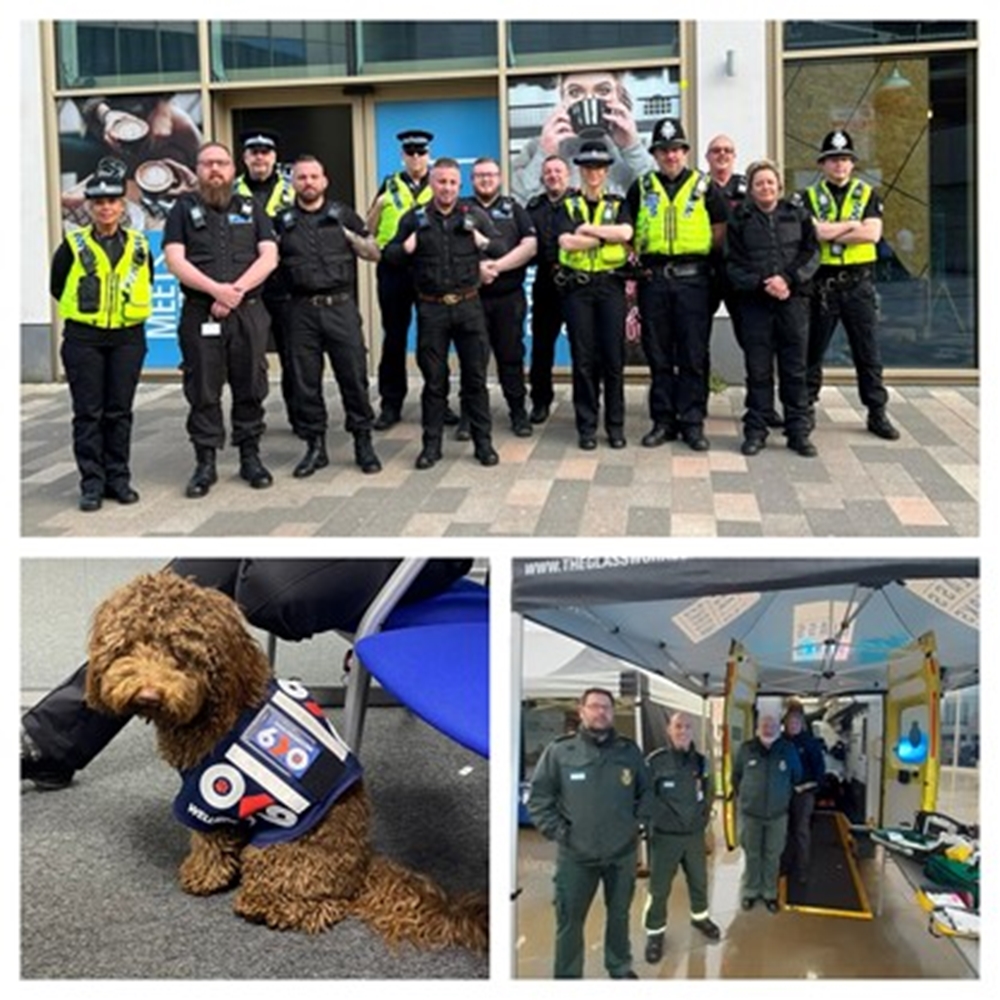 Claire Whitty 41, of Bank Street, Worsbrough Common, was charged with a 5th breach of a Criminal Behaviour Order after persistently begging in the town centre on Wednesday 13 April. Whitty was remanded to appear at Barnsley Magistrates Court on Thursday 14 April where she pleaded guilty to a Community Rehabilitation Order.

Darren Wright 36, of Doncaster Road, Barnsley was charged with burglary of the British Heart Foundation store, Peel St, that occurred on Saturday 12 March. Wright was remanded to court after pleading guilty to the offence and was sentenced to 4 months imprisonment.

On Tuesday 19 April, a 17-year-old male from Thurnscoe was arrested on suspicion of Affray involving several incidents in the Barnsley town centre. The male has been released on police bail while further enquires take place.

Postal requisition: town centre offender charged with possession of a class B drug

Shane Sennett 45, of Old Mill Lane, Barnsley was summonsed to Barnsley Magistrates Court on Wednesday 20 April, where he pleaded guilty to the offence. Sennett received a Benefits Deduction Order of £107 CPS costs of £85 and a Conditional Discharge for 6 months.

Postal requisition: town centre offender charged with possession of a class B drug

James Senior 44, of Cockerham Lane, Barnsley was summonsed to Sheffield Magistrates Court on Saturday 16 April, where he pleaded guilty to the offence. Senior received a Drugs Collection Order, Surcharge Costs of £22 and a Conditional Discharge for 12 months.

A new Public Space Protection Order (PSPO) for Barnsley town centre came into effect on 1 April to replace one that expired in March. The new PSPO contains the same prohibitions and requirements as the old one and some new ones have been introduced.  For full details, visit Barnsley.gov.uk/PSPO

Public benches on Market Hill that had become synonymous with alleged drug use and anti-social behaviour were removed as a result of information collated by the Town Centre Wardens and the Central Neighbourhood Policing Team about complaints about anti-social behaviour incidents associated with the benches.

In April, 24 Dispersal Notices were issued under the Town Centre PSPO. These required individuals to leave the town centre and not return within 48 hours. Four of these instructions were not complied with so these individuals were issued with £100 Fixed Penalty Notices for breaching the PSPO.

The South Yorkshire Police website has lots of crime prevention advice you can browse.

If you need to get in touch, you can contact us in the following ways:

SYP Alerts is a messaging system brought to you by South Yorkshire Police for our communities.

By registering with SYP Alerts you can choose to receive news and appeals, local crime information and/or prevention advice – direct to you by email, text or voice message. You can also receive messages on joint initiative work from Joining Forces partner organisations.

Watch this video to learn more about SYP Alerts, or register below.